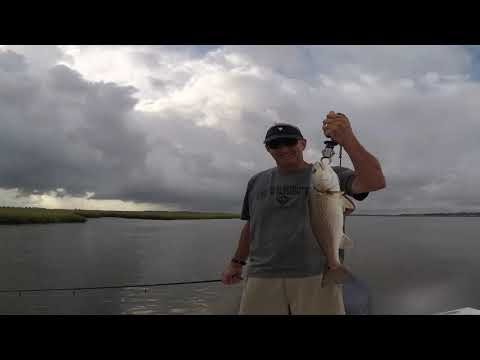 We launched with overcast skies this morning, gambling on the forecast of 50% chance of rain would mean we’d be in the 50% that would not get rain. We lost.  I had met Hayden Page and his dad Gary down at the south end ramp and we made the run up to Seymore’s Pointe to fish the marsh on an outgoing tide. Although we had a bump or two on our float rigs and our mud minnows, we had no takers.We then eased around the corner and fished some rocks and here Gary hooked up and expertly landed a Slot sized Redfish (all fish caught today were released). We tangled with some ladyfish before moving on.

After dropping back to Spanish Drop we fished a couple of large marsh runouts, then a marsh line and we got a bit of action. Both Hayden and Gary landed some feisty Redfish and a hungry, bent up Seatrout. Gary had just landed another Slot Redfish, then another that almost made it when the bottom fell out. We didn’t mind getting wet but when the lighting flashed and the thunder boomed, we pulled up and headed in. Although we had to cut the trip short, we still counted it as another great day to be fishing here at Amelia Island, Florida.