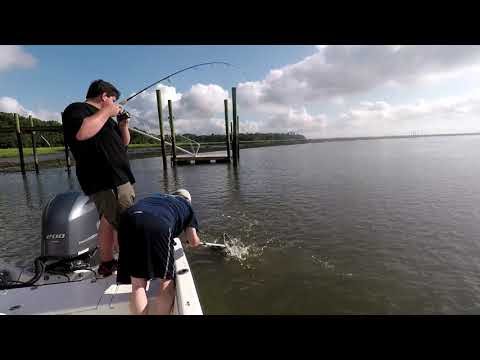 I fished with the Hinote family on Wednesday, meeting them up at the Dee Dee Bartels Park boat ramp. Along with Tommy and Cindy we had their two sons Bennett and Aiden. We made a short run over to Eagans Creek and fished just north of some docks and did pretty good, catching a handful of small but feisty Redfish. Then we eased around to another set of docks and here things heated up just as we were about to leave. Tommy was fishing deep with a jig and minnow and after he felt a “bump” he set the hook and had a pretty good fish on. Tommy played it perfectly and soon landed a nice 18” Seatrout. Then both Bennett and Aiden got in on the action catching those Trout out in deeper water.  Before we left, Bennett had a strong bite and when his drag began to rip I knew it was a bigger fish. He played it perfectly and his dad netted a nice 20” Slot Redfish.

We made the run up the Bell River and fished some docks there. Bennett landed a small Flounder (to give him an Amelia Island Back Country Slam) and a small Croaker.  Our next stop was around at the MOA. There wasn’t much action until Aiden pitched a float rig up by the oysters – his float disappeared, and being ever alert, Aiden set the hook and reeled in a nice keeper sized Flounder.
Our next and final stop was around at Jolly “bank”. Tommy was fishing a jig off the  bow while the two young anglers fished float rigs. Tommy began to get into some small but fun-to-catch Reds, then Aiden reeled in a Red (to give him an Amelia Island Back Country Slam). Bennett had switched back to the jig and it paid off with a Redfish catch of his own. We fished down to the last mud minnow and “left ‘em biting” so as we headed back we counted it as another great day to be fishing here at Amelia Island, Florida.