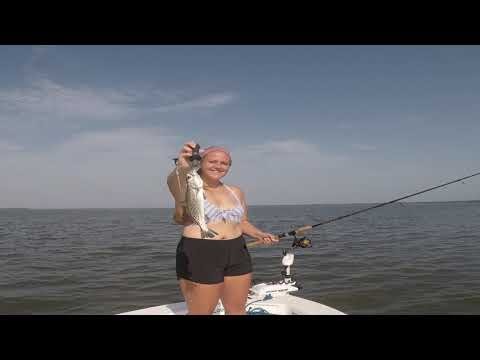 Boy it was a hot one today! We did have a slight breeze but it wasn’t much! I had met Carl and Sherrie Davis and their daughter Hannah down at the Sawpit Creek boat ramp and after we had made the run up the Nassau River to fish the Pumpkin Hill area we settled in to fish float rigs and mud minnows. We had a few good bites and finally Sherrie “knocked the skunk off” when she hooked up and landed a fat Seatrout.  Later, Hannah added one to the catch.We fished some docks at Seymore’s Pointe then tried our hand down at Spanish Drop. Sherrie fought and landed a hard fighting Jack Crevalle then Carl got on the board. He was fishing floating a minnow up near the bank when BOOM! Fish ON! Carl’s drag was zigging but he kept the pressure on, worked it to the boat and landed a Redfish that was right at Slot Size.

Our final stop was around at Jackstaff and here Hannah wrapped things up when she caught a Flounder to round out the family team’s Amelia Island Back Country Slam which made for a great day of fishing here at Amelia Island, Florida